I was in Boston for work this past week and while there, met up with my brother to take my nephew Otto to the German consulate in Boston to register him as a German citizen!  My siblings and I were all born in Germany. In fact, we moved to the US not long after my brother was born. My Dad was naturalized when I was little, but my Mom and my siblings and I kept our German citizenship all these years. Over the years, of course, I’ve debated about whether to give it up. I’ve lived in the US since I was five and in so many ways (most ways in fact) consider myself an American through and through, but still over the years, keeping my German passport and identity has meant a lot to me. It’s an important part of who I am. Now even more so since my parents have passed away, I feel it connects me to them, to family and to our heritage, in a way that is special and unique. Also, somehow, having this connection to another country and culture has also brought me a different perspective on the world and on living in the US. As a baby born to a German citizen, Otto also inherits German citizenship. I am happy that my brother and Evan wanted to give Otto that connection too. I think my Mom and Dad would have been very proud too. With a name like Otto, how could he not be German! I was a bit nervous about the consulate visit. My my role was as interpreter (since my brother’s German consists of “Ein Bier bitte!) and while my German is OK,  German bureaucratic and legal forms are a challenge for my conversational German. But we did OK and the folks at the consulate were incredibly nice. In fact, we did the whole procedure in English. The Germans are picky about names and you can’t name your kid just anything. The US tendency for unusual/bizarre names is not the norm in Germany and it used to be that you had to get approval for a birth name. I think that is no longer strictly true but still, I think the consulate administrator was stunned to meet a baby Otto. And I love the photo of Philp and Evan with Otto in front of the consulate sign—my brother looks so much like my Dad in that photo. The whole process was a good test run for my baby, who as an adopted child would also inherit the same right to German citizenship (and US citizenship too, of course). As parents—whether adoptive or birth parents—there is so much of ourselves that we pass on to our children. While as an adoptive parent I won’t be able to pass on my genetic DNA, I am so glad to be able to share this cultural DNA. And who knows where life will take him or her. Maybe he or she will want to live in Germany someday. 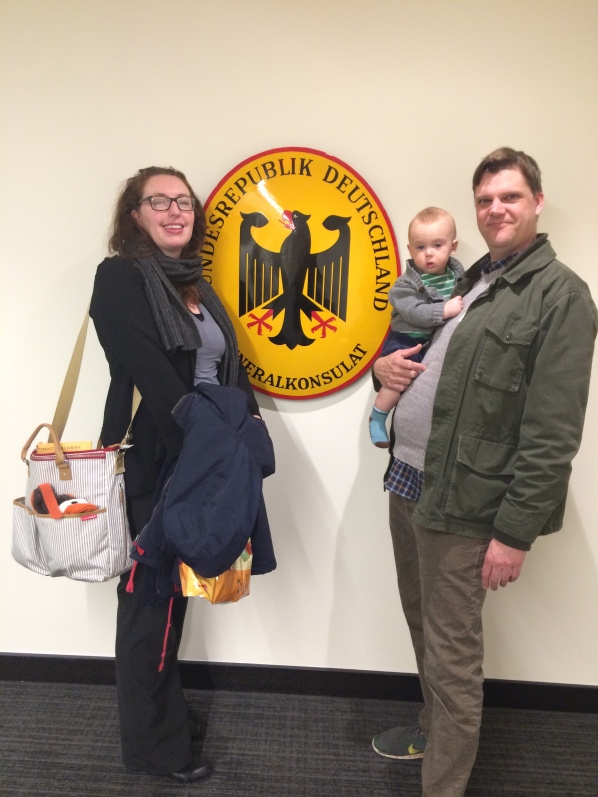